We have lost some dear old friends in the last few months at the Animal Liberation Sanctuary, Nepal. Kalarupa, Tsering and Samten have been with us for many years. Kalarupa was one of the earlier generation of rescues, 2008, and spent most of his life in the old goat quarters behind Kopan Monastery. As a Nubian goat, he soon grew up to be one of the tallest goats and quite a character. He would always come up to us and say hello and expect a rub, and also try to use you as a scratching post. He once even managed to get an article published in Mandala Magazine! 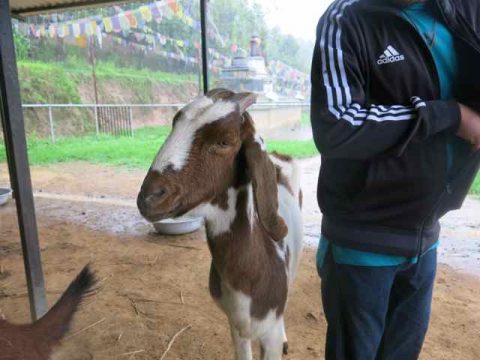 Kalarupa keeps out of the rain

Tsering was one of two girls who were brought in around the same year. This was before quarantine was a regular event for new animals and sure enough she was pregnant several times when new undesexed males arrived and couldn’t believe their luck! Unfortunately Tsering’s kids died in the PPR outbreak in 2010, where half the herd died. Even Kalarupa became sick but the extraordinary efforts of the staff helped save him and a few others who had become ill. At least this meant quarantine finally became a widely recognized essential precaution for new arrivals. Tsering and her sister-in-the-herd Jampa learned various techniques for keeping a safe distance from all the boys. She was a gentle goat and was very good friends with Dzambala and they would regularly be seen together, and Rigzin, the former boss goat. Rigzin was very protective of her after Dzambala succumbed to cancer that took his leg (and prompted the prosthetic limb). Rigzin died a year ago and the older residents have felt the loss of the old structure. 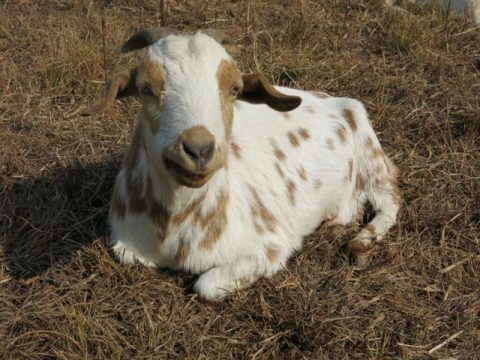 Tsering in a sunny spot

Samten was another strapping lad. He was rescued in 2011 and by the time of the move to the new land in 2014 he was one of the top goats. He was always very friendly not only to staff but also visitors. He became quite fond of a visiting pilgrimage group from Vajrayana Institute, Australia. Perhaps because VI’s resident teacher and pilgrim guide is Geshe Samten? After the death of Rigzin the former boss goat, Samten stepped up to take some of that responsibility but he lost some condition and couldn’t keep hold of the large group like Rigzin could. 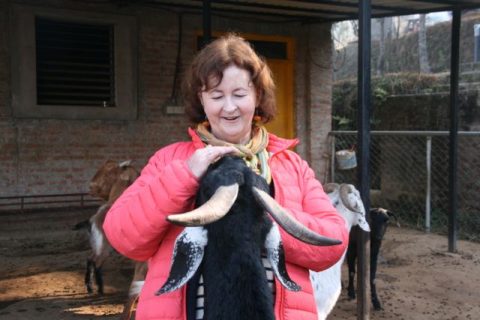 Kalu came to us after the devastating 2015 earthquakes. He had been rescued by an ex-pat from the slaughter of Dashain animal sacrifices and then taken in by a board member of a local animal rescue group. As the animal shelter is mostly dogs, there was no safe place for the new goat. He was subsequently given the run of the owners roof terrace and was not unfamiliar with the lower floors in his ten year period of domesticity, much to the dismay of visitors seeing the long-legged and wide-horned resident coming down the steps or walking passed the couch. The building was damaged in the earthquake and there was no safe place for him to go. As a solitary goat in a human family he didn’t immediately see the benefits of the Animal Liberation Sanctuary facilities and was quite shy. He eventually made friends, particularly with Osel who was also an earthquake time rescue, and adapted to his larger and mostly four-footed family. We hoped he saw his last years with us as a benevolent retirement village. 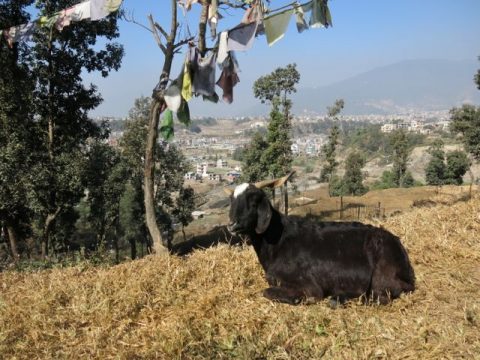 Kalu with a view

As always, it is those we have special bonds with developed over many years that cause us the most grief. We will miss these individuals and pray that they find the best possible rebirth with which to carry out their path to enlightenment.