• Animals raised for food produce approximately 130 times as much excrement as the entire human population – that’s about 40,000 kilograms (88, 183 pounds) per second!

The livestock industry is considered to be “one of the top two or three most significant contributors to the most serious environmental problems at every scale from local to global”, according to a 2006 UN report (1).

In terms of water use, the “livestock sector is a key player in increasing water use, accounting for over 8 percent of global human water use”. The meat industry causes more water pollution in the US than all other industries combined because the animals raised for food produce 130 times more excrement than the entire human population, nearly 40,000 kgs per second! A typical pig factory farm generates a quantity of raw waste equal to that of a city of 12,000 people. 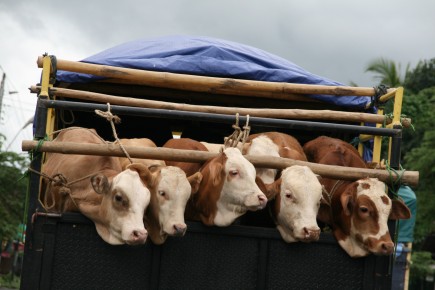 The report warns that “the environmental impact per unit of livestock production must be cut by half, just to avoid increasing the level of damage beyond its present level”.

Whether you go vegan, vegetarian, or make a commitment to minimise what animal products you use, this has an effect in a market economy. It may not appear to make much difference over a day or a week, but each month, each year that you follow this practice, you are influencing the economy and saving lives.

Each time you don’t buy meat, this becomes a statistic and whether it is the small take-away business owner, the supermarket chain number cruncher, or the farmer, it is registered and they respond inevitably to the market change.

If we each reduced our consumption of animal products we would not only reduce the suffering of animals, not only reduce global warming and environmental degradation, we would also reduce our grocery costs and give a boost to our health. As the Buddha said:

“Happiness is never diminished by being shared”.