Every day we make choices on what we eat without considering the suffering that makes up our food. By adopting a vegetarian, or even better vegan, lifestyle we can reduce this suffering. Billions of animals are killed around the world every year so that people can eat their flesh. For example, over 9 billion chickens are killed annually in the US alone.

We can make an active choice to lessen our contribution to the killing (and therefore lessen the karma of killing accumulated by others).

Even though we are not directly doing the killing, we are still contributing to these deaths.

According to the Lankavatara Sutra the Buddha said:

“It is not true, Mahamata, that meat is proper food and is permissable for the Sravaka when [the victim] was not killed by himself, when he did not order others to kill it, when it was not specially meant for him.” 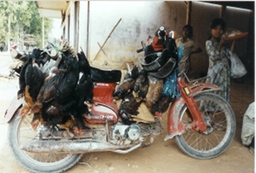 The Buddha gave thousands of teachings and some teachings were given in different ways to different audiences, depending on their disposition. The Lankavatara Sutra devotes an entire chapter (Chapter 8) to the avoidance of eating meat. This sutra, and others like it, is a Mahayana teaching directed to those disciples who have affirmed a wish to develop great compassion and bring all beings to enlightenment.

“For innumerable reasons, Mahamati, the Bodhisattva, whose nature is compassion, is not to eat any meat…Thus, Mahamati, wherever there is the evolution of living beings, let people cherish the thought of kinship with them, and, thinking that all beings are [to be loved as if they were] an only child, let them refrain from eating meat. So with Bodhisattvas whose nature is compassion, [the eating of] meat is to be avoided by him. Even in exceptional cases, it is not [compassionate] of a Bodhisattva of good standing to eat meat.”

For more further discussion about Buddhism and eating meat, read the article by Geshe Soepa on the Enlightenment for the Dear Animals website.