In commemoration of the 54th anniversary of the March 10 Tibetan National Uprising Day Anniversary we are posting some excerpts from His Holiness the Dalai Lama’s Nobel lecture from 1989. It is sad that many of the tragic issues raised here are still occurring and the solutions so eloquently offered by His Holiness have not been taken up by China.

Excerpts (a link to the full text is below).

“Thinking over what I might say today, I decided to share with you some of my thoughts concerning the common problems all of us face as members of the human family. Because we all share this small planet earth, we have to learn to live in harmony and peace with each other and with nature. That is not just a dream, but a necessity. We are dependent on each other in so many ways, that we can no longer live in isolated communities and ignore what is happening outside those communities, and we must share the good fortune that we enjoy. I speak to you as just another human being; as a simple monk. If you find what I say useful, then I hope you will try to practise it. 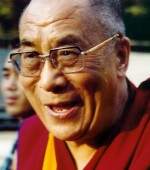 I also wish to share with you today my feelings concerning the plight and aspirations of the people of Tibet. The Nobel Prize is a prize they well deserve for their courage and unfailing determination during the past forty years of foreign occupation. As a free spokesman for my captive countrymen and -women, I feel it is my duty to speak out on their behalf. I speak not with a feeling of anger or hatred towards those who are responsible for the immense suffering of our people and the destruction of our land, homes and culture. They too are human beings who struggle to find happiness and deserve our compassion. I speak to inform you of the sad situation in my country today and of the aspirations of my people, because in our struggle for freedom, truth is the only weapon we possess.

“…in our struggle for freedom, truth is the only weapon we possess”

The realisation that we are all basically the same human beings, who seek happiness and try to avoid suffering, is very helpful in developing a sense of brotherhood and sisterhood; a warm feeling of love and compassion for others. This, in turn, is essential if we are to survive in this ever shrinking world we live in. For if we each selfishly pursue only what we believe to be in our own interest, without caring about the needs of others, we not only may end up harming others but also ourselves. This fact has become very clear during the course of this century. We know that to wage a nuclear war today, for example, would be a form of suicide; or that by polluting the air or the oceans, in order to achieve some short-term benefit, we are destroying the very basis for our survival. As interdependents, therefore, we have no other choice than to develop what I call a sense of universal responsibility…

The Five-Point Peace Plan addresses the principal and interrelated issues, which I referred to in the first part of this lecture. It calls for (1) Transformation of the whole of Tibet, including the eastern provinces of Kham and Amdo, into a zone of Ahimsa (nonviolence); (2) Abandonment of China’s population transfer policy; (3) Respect for the Tibetan people’s fundamental rights and democratic freedoms; (4) Restoration and protection of Tibet’s natural environment; and (5) Commencement of earnest negotiations on the future status of Tibet and of relations between the Tibetan and Chinese people. In the Strasbourg address I proposed that Tibet become a fully self-governing democratic political entity.

I would like to take this opportunity to explain the Zone of Ahimsa or peace sanctuary concept, which is the central element of the Five-Point Peace Plan. I am convinced that it is of great importance not only for Tibet, but for peace and stability in Asia.

It is my dream that the entire Tibetan plateau should become a free refuge where humanity and nature can live in peace and in harmonious balance. It would be a place where people from all over the world could come to seek the true meaning of peace within themselves, away from the tensions and pressures of much of the rest of the world. Tibet could indeed become a creative center for the promotion and development of peace.

The following are key elements of the proposed Zone of Ahimsa:

• the entire Tibetan plateau would be demilitarised;

• the manufacture, testing, and stockpiling of nuclear weapons and other armaments on the Tibetan plateau would be prohibited;

• the Tibetan plateau would be transformed into the world’s largest natural park or biosphere. Strict laws would be enforced to protect wildlife and plant life; the exploitation of natural resources would be carefully regulated so as not to damage relevant ecosystems; and a policy of sustainable development would be adopted in populated areas;

• the manufacture and use of nuclear power and other technologies which produce hazardous waste would be prohibited;

• national resources and policy would be directed towards the active promotion of peace and environmental protection. Organisations dedicated to the furtherance of peace and to the protection of all forms of life would find a hospitable home in Tibet;

• the establishment of international and regional organisations for the promotion and protection of human rights would be encouraged in Tibet.

Tibet’s height and size (the size of the European Community), as well as its unique history and profound spiritual heritage makes it ideally suited to fulfill the role of a sanctuary of peace in the strategic heart of Asia. It would also be in keeping with Tibet’s historical role as a peaceful Buddhist nation and buffer region separating the Asian continent’s great and often rival powers…

In conclusion, let me share with you a short prayer which gives me great inspiration and determination:

For as long as space endures,

And for as long as living beings remain,

Until then may I, too, abide

To dispel the misery of the world.

His Holiness the 14th Dalai Lama of Tibet

Tree of Compassion brought veterinarian Dr Howard Ralph from Australia to Nepal for urgent surgery on Osel, a goat at the Animal Liberation Sanctuary….