We would like to announce a fantastic opportunity to help animals in Nepal. In partnership with Enlightenment for the Dear Animals, we are conducting a retrospective ‘stupa-thon’ by circumambulating the famous Boudhanath Stupa in the Kathmandu Valley, Nepal. ‘Stupa-thon’ means you can sponsor Tania to circumambulate the most holy and extremely large stupa 108 times in one day. ‘Retrospective’ because she’s already done it, on the holy Buddha day of Lhabab Duchen (24 November) (some plans come together later than others!). She not only went around the stupa 108 times (which took many hours and involved some hardships – Tania is still recovering from a sprain part way through the day), but she also did light offerings, recited many mantras, prayers and dedications, made donations, offerings of paint and prayer flags to the stupa and so on. Why? The merit of any activity on that Buddha day is said to be multiplied 100 million times. And Tania dedicated the activity primarily for animals, particularly those at the Animal Liberation Sanctuary, Nepal. 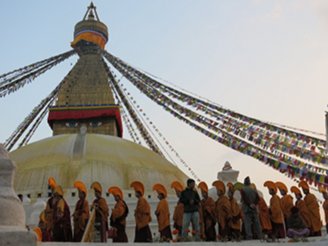 Since Tania has already succeeded in her task (from early morning to late at night), all you have to do is decide how much you would like to sponsor for the 108 circumambulations and offer your donation! And because it is incredibly huuuuuuge karma, you can dedicate the merit you are making for supporting the practice, and the support of the animals, and your generosity, to any and every cause that you know needs good karma. Everyone’s a winner!

No need to pledge – just donate the amount you wish, either through the FPMT donations page or through Tree of Compassion. And don’t forget to dedicate the merit!

The Benefits of Stupas

Today we joined an international team on a visit to a remote valley 2hrs south of Kathmandu. With HSI, World Vets, Animal Welfare Network…