Today we were working in the Lalitpur District to the southwest of Kathmandu, again in a team consisting of our veterinarian Dr Umesh Mandal, the SPCA Nepal, Nepal Veterinary Association and senior veterinary students, as well as government staff from the Domestic Livestock Office.

The drive through Lalitpur illustrates how the older multistory buildings are usually the worst hit by the earthquakes. The road up to Ghusel is a long, twisting mountain track that passes many small villages, hamlets and isolated dwellings perched in what would normally pass as ridiculous locations in more level countries. Incredibly steep slopes meet at narrow ridges and spurs where people have scratched out a life. The government staff explain that from one area of mountain sides two tankers of milk are collected and trucked to the city each day from the scattered farmers’ animals.

The main village we stop at it is a fifty-fifty mix of low standing buildings and rubble. Temporary shelters have been built for people and animals. After visiting and checking animals at different locations here, mostly water buffalo and mostly only minor issues, the team breaks into three to cover the widely spread-out cases that are the reason we are here. While medical supplies are sorted we watch a landslip in a not-so-distant mountain side and wonder what else we will see today. One team has over an hour’s trek before them to some injured water buffalo. Another team takes the 4wd down the mountain side. We go with Dr Umesh and the government vehicle. 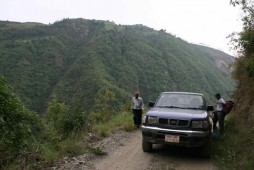 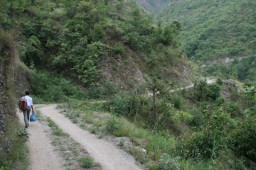 The long walk to village.

Not long on the journey higher into the mountains a hissing sound erupts from a rear tyre. By the time the driver finds a place to stop (in the middle of the narrow road) the tyre is completely flat. ‘It is OK, we have a spare’, they reassure us. I can see the spare and it is well passed its best and we are well passed a good road on which to feel comfortable using it. The government staff stay to fix the wheel while we begin walking, later getting picked up by motorbike the rest of the way to where a water buffalo has a broken leg. 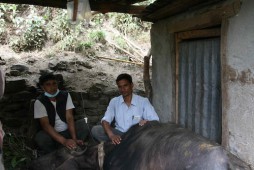 On a steep spur with a shoulder barely wide enough for a couple of buildings, a family has lost its home and animal shed. Yet they have already built a shelter for the two water buffaloes and are working on something for themselves. Local children have gathered (from mostly not too near) to watch the proceedings as the splint is removed from one buffalo, the original cast checked, splint renewed and additional medication given. The other buffalo is also helped. Supplements and medication are given to the farmer. Medicines for cows and water buffalo, particularly IV fluids, are expensive as so much is needed. It is also harder to carry all that you may need. 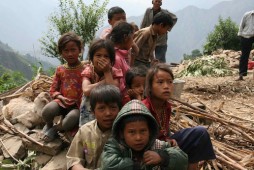 Children on the ruins of their home.

The government vehicle arrives and we depart and make about 2km before we hear a new hissing sound. With no safe place to stop and no spare, the driver continues another 5 minutes until we get to a hamlet where the residents are constructing a new home from bamboo. The road is partly covered by a land slip so there is no way to drive further without going through bamboo. The hissing continues.

The driver jumps out and pushes his finger onto the puncture. Somebody else gets a plastic bag and tries to force it into the hole. Being a veterinarian mission, what better device to do this than forceps? A villager then provides a 3” nail, which is inserted to lock the plastic in place. The puncture is fixed! Despite being below ideal pressure, amazingly the repair lasted all the way back to Kathmandu on these appalling roads with a full load when we finally left later that afternoon. 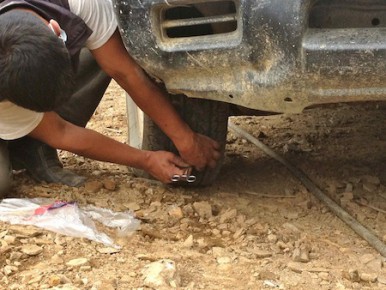 Forceps, a plastic bag and a nail – puncture fixed!

The rest of the day was devoted to water buffalo cases of varying descriptions. On one mountain side, below the ruins of the original house where the father died when the first quake felled the building, twenty water buffalo were living in a tomato greenhouse made from bamboo and plastic. The family was next to them in a similar structure. 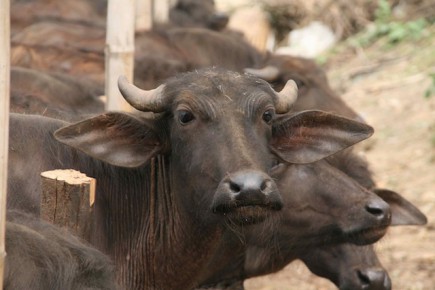 When everyone had reassembled we were given updates on those animals treated – fractures, a rectal prolapse, lacerations and so on. We headed back down the mountain towards Kathmandu. On the outskirts a stop was made for a downed cow who was only a few days from giving birth. The temporary animals shelter (often the first thing built) stood in the middle of the ruins of what was once quite a substantial home. As darkness approached everyone worked hard to get the cow to respond. The owners lit a fire to heat water so that the IV fluids could be warmed and others helped ferry supplies from the vehicle parked back on the road. By the time we were dependent on torchlight Dr Umesh was happy the cow had come through the worse. She will be revisited (on Sunday 17th she was checked again and has recovered well). 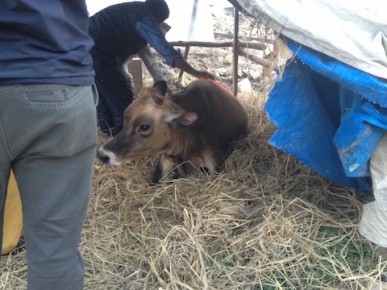 Mother-to-be in trouble after the quake. 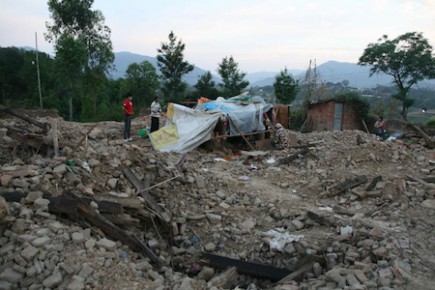 Cow shelter in the ruins of former home.

There is still much to do, both in terms of cases not yet checked in some outer lying Districts badly affected by building collapse and road closures, as well as following up previous cases.