During the latest larger earthquake in Nepal (measuring 7. 3 on the Richter scale) on Tuesday 12th of May we were on the second day of an animal rescue and assistance trip in the Nuwakot region, one of the worst affected areas from the original quakes. With our veterinarian Dr Umesh Mandal, the SPCA Nepal, Nepal Veterinary Association and senior veterinary students, we were in the town of Devi Ghat when the rumbling started. People scrambled to the streets and open areas, screams and cries going out from fear and concern for others. A few minutes after the molecules of earth and beings settled people began working out what was newly damaged and what was no longer safe.

Images of a downed mother cow who had spent most of the last two weeks after the earthquake unable to stand until giving birth only hours before we arrived. It took a lot of effort from everyone to get her on her feet but she still has a lot of recovering to do.

We had returned to the local government veterinary service, a fractured building victim to the first quakes. A woman whose goat was treated yesterday was there for follow up treatment and advice. A calf was still tethered to the holding pen. The students in particular were sending texts and calls, receiving them (“safe, safe”), and also checking internet to see how big this one was. The first report was 6.9 but rapidly rose to 7.1. Dr Umesh had already gone back to treating the animals and preparing for the afternoon trip to Nuwakot and the villages higher up the mountain. Reports from the local veterinarian technician said that the famous historic Durbar Square there had received further damage. 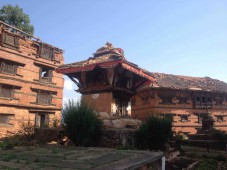 We donated medical supplies to the local vet at Devi Ghat to continue work here and follow up treatment from yesterday (which included a myriad of injuries and illnesses, a cow who had barely stood in 2 weeks who gave birth and had collapsed again, a water buffalo that had been trapped in rubble for 18 hours, a young water buffalo with a badly broken leg which we finished treating by torchlight), then headed up the narrow winding road to Nuwakot.

We were given permission by the police to have a quick look at Durbar Square. Truly tragic to see these historic buildings in such disarray. One temple that had previously been unharmed now showed the scars of this latest quake. Dr Umesh said, “The Gods must truly be angry with us”. I suggested maybe not him so much, as so far he and his family are safe and he is still totally dedicated to helping as many as he can in a very selfless way. I had joked with him yesterday whether his students were happy that veterinarians only have one meal a day. He laughed, agreeing that usually he only had time for a cup of coffee in the morning, then nothing much until dinner time. That was true of yesterday (where dinner came finally at nearly 10pm after we had carefully checked hotels out to find a safe one and the hotel had to find food enough for an extra 11 people), and today, where we didn’t stop for lunch until 4pm at the next village. 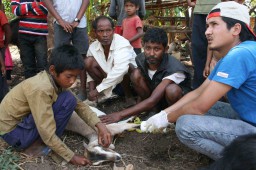 Treating a fracture in this little goat.

More fractures, slow healing wounds, downed animals, infections, abscesses, persistent diarrhoea and even a case of toxicity due to a home treatment remedy gone wrong (burnt motor oil smeared over a calf to treat a skin infection). We have seen food and medical aid getting to towns and villages in this area, which is so important, but helping the animals is also of great assistance to the people. They need these animals for their livelihood and they also treat them like family and worry for them. When their house is in ruins, when loved ones have died, when they are living in makeshift shelters and struggling, seeing an injured or sick animal get often lifesaving treatment is a great emotional (and financial) boost. 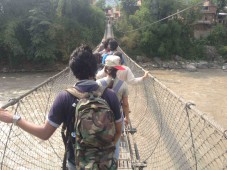 Rope bridge we have to cross to get to animals.

The cut off for this trip is supposed to be 5.30pm to allow enough time to get back to Kathmandu safely. Everyone says it. “5.30, 5.30”, but in a hamlet of small smashed dwellings on a steep mountainside overlooking the wide Nuwakot district no one intends to leave before all the animal cases are finished. A calf is checked and treated, the one with the motor oil rubbed into her skin. From next door rubble and chips of brick and mortar fly as the owner is trying to demolish the first floor wall of his house with a small crowbar. The villagers built these homes themselves by hand. Now they have to demolish them themselves, by hand. 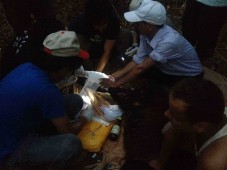 We are forced to work by torchlight to repair a fractured limb.

We race back up to the main road, share some medical supplies with the local vet tech, exchange last minute news, advice and words of encouragement, then back into the 4wd for the long trip to Kathmandu. Even this is not uneventful as I spot a domestic dog with a long rope for a lead trapped on a busy highway bridge. We stop where it is safe, rush back and help the dog out of harm’s way. It is another hour and a half and by then the streets of the capital are quiet and scattered with people bunkering down at ground floor level, in shops and garages, and in tents in the open ground for another nervous night.