Today our veterinary team, consisting of SPCA Nepal and Nepal Veterinary Association, Tree of Compassion and several of Dr Umesh’s students journeyed towards the badly affected Nawakot District. It’s another bumpy ride as we travel over rough roads, slated for upgrades this dry season, the dry season that has continued to be interrupted with rain, in the SPCA Nepal animal ambulance van. Along the main road we could again see the destroyed houses in the valley, as well as those seriously damaged and irrepairably cracked and fractured. Many locals had come to wait at the occasional shop or dwelling on the roadside as there were aid truck coming but also government officials for varying purposes. 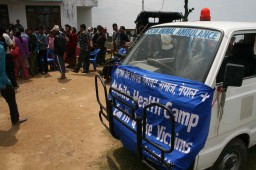 We arrived at the first port of call, Kakani. The District Livestock Office was another shell-shocked building but still serviceable. We were given updates of where animals had died and where they were injured and needing assistance. The adjacent government building had a large crowd outside, to register for government aid. The people were smiling and seemed quite happy to see each other but the underlying tension showed and tempers and frustrations were close to the surface. This is the 15th day after the first earthquake and many people feel they have not received the help from the government that they expected.

We headed off down a very steep and rough road to a farmhouse where some buffalo had had their building collapse around them. The road eventually became too steep and rough for the SPCA van/ambulance and we split up, myself and Dr Umesh borrowing a motorbike and several others walking. 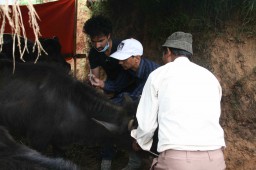 The farm house was largely a crumbled ruin. The extended family were grateful for help and quickly took us to the temporary animal shelter where several buffalo and goats were residing. Today is Mother’s Day back home so it was nice to be able to do something for this beautiful mother. The mother buffalo had wounds on her back and they were quickly treated. The other animals were checked and medication given as needed. Supplements were given to the farmers and instructions on the ongoing care of the wounds etc. Other animals in the area were also examined and treated where needed. We also gave out items for the farmers to be able to care for them such as medicines and dressings. 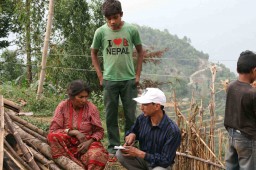 Dr Umesh explains how to care for the animals.

The trek back up the hill was an epic, but Dr Umesh found some ‘bush tucker’ along the way, helpful for the walkers, and also we on the motorbike which was having a fuel problem and kept cutting out. The mountains are steep in Nepal! The children of the family we had just visited explained that their school was down and up the other side of a very steep valley. 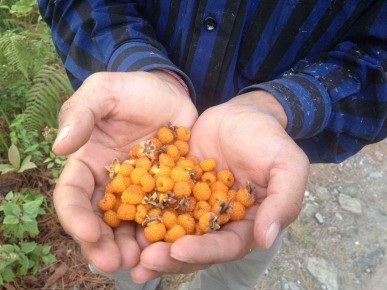 Dr Umesh finds some edible local berries along the way. 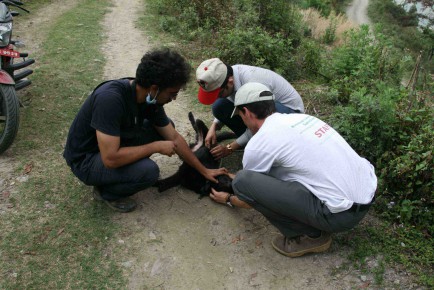 Along the way, I noticed a friendly young dog who I stopped to say hello to. I quickly noticed that he was dog covered with ticks which can be quite debilitating particularly for a young animal. We gave our canine friend medical attention. He very patiently put up with all our prodding and jabbing and after a good tummy rub, he happily went on his way.

Finally when all the animals had been seen to, we headed out after a cup of tea and a very late lunch/snack in a temporary café next to a tent village. Villagers saw the signage on the van and so came up to ask for items. Dr Umesh provided medicines and supplements to them. Then there was one more stop. 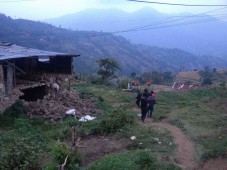 Walking through a ruined hamlet.

In the gathering gloom of big storm clouds and nightfall we left the main road on foot down passed a hamlet of destroyed mud buildings. Some of the residents were in tents on a level area below. A cow had diarrhoea and some of the goats were ill. Not surprising given what they have gone through and with the wet weather, stress related and respiratory illnesses are common. By torchlight the team went to work and all the animals were checked and treated and we managed to scramble back to the van to go back to Kathmandu before the first dollops of rain began to fall once more. 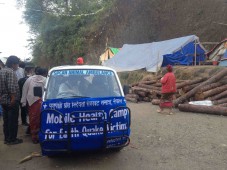 I was given a lift to Kopan Monastery but the main road I forgot was a muddy mess due to the ‘dry season’ road works. Before we could turn back we hit a large rock and the van rode up and got wedged on it in a sea of mud. 9pm and we both looked out at the bog wishing we were somewhere else. No choice but to get in there! A drunk man returning from a session helped us get paving stones to wedge under the wheels. I dug as much mud away as I could and because the van is so small I could lift and bang and wedge the pavers under the wheels. Third attempt and we reversed off and kept going back! The driver didn’t know the back streets of Boudhanath so I asked him to drop me at a taxi who it turned out, didn’t either. Eventually I made it back in one piece, albeit a lot muddier, feeling even more conscious of how so many Nepalis are exposed to the elements and would be feeling far less secure than me.

Before finally getting to bed, I checked on the monastery cat with her swollen foot (I have given her medication), I did a repack of the medical supplies and other gear, as well as a rescue of my muddy shoes.

The 9th August is International Day of the World’s Indigenous Peoples. According to the UN there are around 370 million Indigenous people in the…