Today we quickly rushed down from Kopan as I received a call from a tourist about a dog that couldn’t move. We found him by the side of the road. After asking around, it turns out that the dog is owned and was recently hit by a motorcycle. He had received some medication but clearly something was still going untreated as he was in quite a bit of pain. It is also clear he needs some intensive treatment and nursing so we called our friends at Street Dog Care who promptly came out to attend to him and take him in for a while.

With the dog in good hands, we rushed back up to the animal sanctuary to attend to Palden, one of our goats with oedema. He was given antibiotics, pain relief and some fluid was drained. He seems to be improving. Pema will attend to him again this evening, 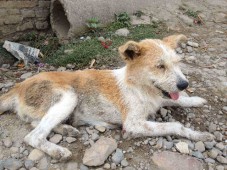 As getting around Kathmandu these days takes substantially longer than usual due to rubble blocking roads, toppled buildings, roads closed, we then raced down to SPCA, late for a meeting of some international and local groups about our strategy to rescue animals .

After the meeting, we checked a young cow who Dr Umesh had applied a splint to as he had a fracture. He was much better but there was considerable swelling still. This we will need to attend to. There were several other young cows with various injured we attended to also. So glad we can help them! 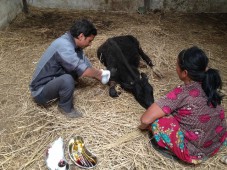 We then discussed with the SPCA Nepal about sending a team of vets for an extended visit to the Nawakot area. This district was badly hit by the earthquake and suffered more human deaths than the much reported Gorkha district. Currently, the three top areas which suffered the most human deaths from the initial earthquake are Sindhupalchok, Kathmandu, followed by Nawakot. Over the next couple of days, our mission will become clearer as to where we will go, how we will travel, and what medical supplies we will bring. Fortunately, Tree of Compassion have quite a few medications thanks to the kind donations of people in response to helping the animal earthquake victims of Nepal.

As you may know, Tree of Compassion is helping MAITRI Charitable Trust with this Chuffed fundraising campaign. If you donate on 15 November, Lhabab…