A couple of jolts in the night reminded everyone why being in a tent was still a safer option. Communications are still difficult  so we went out as two separate teams. Our veterinarian was able to help some injured animals. One cow unfortunately died despite treatment.

The afternoon field trip was delayed due to more rain. This is supposed to be the dry season with increasing temperatures and dust storms. Yet Kathmandu has had many alternate days of rain this month already and more to come. The roads become muddy and slippery and the moisture weakens buildings where new faults lie. Locals are worried that the real rain coming during the monsoon will result in more collapses of otherwise strong looking buildings.

Finally a let up in the weather allowed Pema our local sanctuary manager, and myself to go out to survey the Boudha area – the heart of Tibetans in Kathmandu. The majestic stupa is normally radiating calm amid swaying lines of fluttering prayer flags. Now the golden apex is askew with deep cracks on several sides and the prayer flags have fallen. The bustling circuit around the stupa is still very quiet with few shops and cafes open and even fewer people circumambulating the holy object. Tourists are almost non-existent. However, the boom boom of Tibetan Buddhist drums come from a monastery as the monks return to buildings to do prayers. 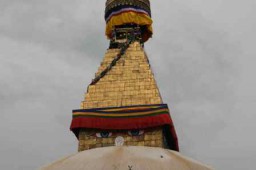 The ‘stupa dogs’ that we saw had no injuries. Pema gave the pigeons some food, as did some passing monks.

South of the stupa and closer to the airport is a large makeshift tent city. Thousands of people are sheltering here out of the adjacent high rise apartments of the area. Most shops are still shut and people are still making do with what they brought with them. It will still be another night or two before they feel comfortable to return to their homes, although, thankfully, now the atmosphere is much more cheerful. People I spoke to felt more relaxed and that the worst of the dangers were over. 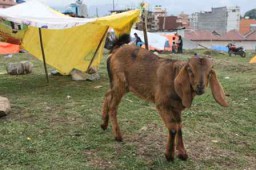 We visited Pema’s households tent. A simple tarpaulin to house over 6 people. His father and sister had come from their village several hours away last week to visit a hospital. They are stranded here and Pema’s mother is stranded in the village in a house with deep cracks in once section. The road to the village has been cut by a big landslide and it may be a week before it is cleared. Meanwhile his sister’s hospital appointment has had to be rescheduled. They share some simple black tea with us then we continue on.

Most of the buildings in this area have survived, however, where they have come down there has been loss of life. A four storey building separated from its neighbor and collapsed on its self and into the street. Elsewhere, a boot sits forlornly on a concrete beam in a place where several families died. 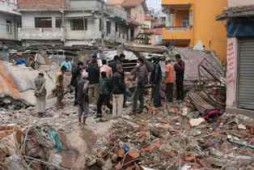 This is still a dangerous place. Another multistory building has cracks from the foundations right up each floor. Only a structural engineer can confirm whether this is superficial or terminal. Will it remain and be saved or will it collapse unpredictably? In another street some makeshift electricity work is going ahead to replace some wires. Wiring in Nepal is questionable at the best of times.

We are still trying to connect to other animal rescue groups to pool resources. At least today I can get phone card recharges. Electricity is off across the valley until every collapsed home is disconnected to ensure electrocution doesn’t occur again (some have already died from this). Generators are the only means of power and fuel is limited. My phone has just sighed and switched itself off. My cameras need recharging and the laptop will be the next to go. The next dose of power is due soon.

Water will be the biggest concern and it always is in short supply at the best of times. At Kopan Monastery a meeting was called for all international visitors. People who could leave were encouraged to head to a functioning hotel but to wait 2-3 days before attempting the airport, where long queues and chaotic conditions ruled. Scheduled flights were disrupted to allow for the essential aid flights. The roar of the big military planes is both chilling and heartening in equal measure. For those guests remaining, water conservation is the rule. One of the large water tanks is broken and the daily pumping of water to keep this monastery on top of the hill running can only be done with the twice daily dose of generator power. ‘Please don’t flush’, was the request. ‘Do I need to explain this?’

After our visit we returned to check on the animals. Pema finished the round of daily wound treatment and medicines, particularly for Kalden the calf who is almost fully recovered from terrible wounds back in January when we were notified of his near death state. He has become a great friend to Christmas who generally can’t socialize with the other cows as he has a congenital condition that restricts his mobility. 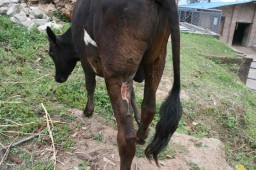 We double check food supplies. There is enough for the cows for 10 – 14 days, which is hopefully enough to get through the shortage that will ensue soon. The goats’ stores were restocked the day before the earthquake and will be adequate for at least a month. Beyond that the price may be affected but hopefully supplies will be available.

Tomorrow we will head out to worse affected areas so that we can provide assistance to any injured animals.

Thanksgiving Day is coming up this year on 28th November. While it is a North American tradition it is illustrative of how traditional celebrations…