The city is still very quiet and even the monks who are normally very active by 6am were taking as much time to rest up as possible. There was quite a decent rumble which prompted stragglers to finally get mobilized.

There is still food in the kitchen although supplies are dropping. Shops may not be open until Tuesday and the roads to China and India are both damaged. This is the real fear, that once the tremors have stopped, the broken water lines, loss of electricity, food shortages and sanitation issues will be the real problems.

I went down to the main sanctuary with Pema to check the animals and infrastructure. As promised, there was no injury or damage. It was ‘business as usual’, even though that meant a number of animals with minor health and medical ailments, the normal issues with maintaining the place and providing the 50 animals (goats and one sheep) a safe and healthy life whilst protecting the sanctuary environment from nibbling mouths! 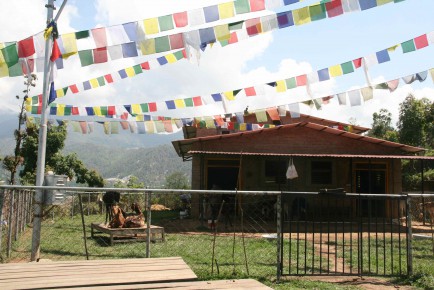 Some of the initiatives started in January had taken hold – planting of feed grass, the fencing of trees to prevent ringbarking by the goats, etc. The unusual rain that had fallen may have contributed to the earthquake, but it also provided much needed growth that wouldn’t normally be expected until the monsoon in June.

With communications seriously disrupted and the streets still being kept free for fear of falling buildings and debris, my plans to get out further into the valley today were put on hold. We will try for Tuesday.

Holidays are often the perfect time to catch up on those neglected chores or doing renovations. If you need to do some painting, there…