Tree of Compassion’s Phil Hunt was in transit to Nepal when news came of the 7.8 earthquake near Kathmandu.

Heading for the Animal Liberation Sanctuary with medical equipment and supplies to continue work at the sanctuary, the earthquake struck. If I could still get through I would not only help at the sanctuary, depending on the immediate need, but assemble a team to deploy elsewhere in the hard hit Kathmandu Valley and possibly further afield.

Thai Flight TG319 was not the usual collection of tourists and returning Nepali business people and workers. This time it was largely made up of humanitarian aid workers, UN officials, international media and some Nepalis rushing home to help their families. It was one of the first available flights into the disaster area.

The flight was delayed as a last group of passengers made the flight, including an Australian TV news crew diverted from another job. Approaching Kathmandu the plane was put into a holding pattern for over half an hour due to congestion on the tarmac. We all looked out the windows to try to detect any earthquake damage – still far too high at 4000m. Everyone was quite frustrated not being able to do anything or learn anything as we circled around again and again above a picturesque landscape below that gave no hints of whether people and animals were in need or not.

A ripple of relief as the captain announced we were heading in to land. We flew into the Kathmandu Valley and saw the edges of the sprawling city. More and more orange, white and blue tarpualins could be seen, showing that people had spent an uncomfortable night away from buildings as advised.

As the plane approached I saw several large puffs of orange dust on the outskirts of the city, to the north and west. Could they be demolishing dangerous buildings already? We landed and then stopped part way along the approach to the airport buildings. The captain said that there was no one currently available to process us. People pulled out there phones and soon learned a 6.8 earthquake had hit during our landing and the airport buildings were evacuated and all other flights diverted. Would we get sent away? What state was the airport in? We had seen 5 Indian military C-130s already at the airport, some unloading, one still taxiing in.

Over an hour later we jolted forward and taxied to our destination. Everyone had been doing their last checks of equipment, disaster relief plans and so on. The doors opened and we went out into a city in turmoil. Passengers for outgoing flights were grouped outside of the airport building gates. Cracks could be seen in the airport corridor and at one place the tiles had buckled up right across the floor. Immigration had its normal slightly dysfunctional air but the official taking my visa fee looked shell-shocked as he hastily returned to his seat in a building he didn’t want to be in after a night probably sleeping under a plastic tarpaulin. It was surreal to see the TVs in the background advertising tourist destinations whilst everyone here just wanted to get out of the building made up of tens of thousands of Nepali orange bricks.

The baggage took some time and trolleys were in short supply. I found a monk from Kopan Monastery (where the Animal Liberation Sanctuary is located) in a crowd of anxious people waiting for incoming passengers in a larger sea of humanity trying to get out of Nepal. Two couples from California were looking out at the people holding names. It was their first trip to Nepal. They too were in transit so just continued their journey. They are supposed to be going to Everest Base Camp, but with news that people have been killed in avalanches there, not to mention transport issues, it is likely there holiday may already be over.

A queue of Indian workers ran from the terminal building right out the airport gate and into the main road. Apparently the Indian Government is providing free flights to Indian Nationals who don’t have to be in the disaster area. Tempers were frayed as the wait continued. Our flight was one of the last as they tried to assess damage and the flights would be even more disrupted.

Driving towards Boudhanath and Kapan Hill the roller doors were closed over normally bustling shops. Traffic was almost non-existent. The damage was less extensive on this side of town than the centre of Kathmandu, but where buildings had come down you could see how quickly the normal functions of a city would be disrupted. In open areas people were gathered around makeshift shelters. The Nepalis were taking the advice of staying away from buildings seriously. At each place of destruction I was told of how many people were thought to have died there.

I looked carefully for any injured animals. Here at least there seemed to be less damage and certainly no sign of casualties. It would be in the worst affected areas where injured animals would be more likely to be found.

At Kopan Monastery the monks and western-eastern visitors for a scheduled teaching were outside, most gathered at the open stupa garden in a mini tent city. Damage was minimal but several of the older buildings had some serious cracking and slipping and were no-go areas.

I found Pema the Animal Liberation Sanctuary Manager and he confirmed our earlier email notification that the animals were fine and the structures unharmed. I visited the cows who had just started to come into the shed, including Kalden the calf who we rescued from the street in January and who had a most amazing recovery from terrible wounds after being attacked by dogs. 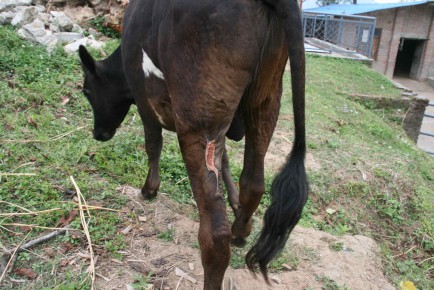 I put my bags away and found a place in a tent for the night ahead. Lama Zopa Rinpoche, the founder and Spiritual Director of the monastery and the international Buddhist organization FPMT, not to mention the rescuer of the majority of the animals at the ALS, was sitting on a chair under a tree talking to visitors and later gave a teaching. As darkness approached and rain clouds closed in we all retreated to tents and for most another slightly uncomfortable night. Fortunately the tremors had much reduced and there were only few rattles and rumbles after my arrival until the next morning.

March 21st is International Day of Forests. It is a time to raise awareness of the importance of all types of forests, woodlands and…