During a search for injured animals today we came across a most appalling and heartbreaking scene. Along one fence we stopped counting at 50 kangaroos killed at this barrier. Kangaroos of all ages, large males, mothers with joeys at their sides, all trapped by the wires. Some had been caught by the top wires, their feet or tails as good as snared, and died dangling from this seemingly heartless blockade. Others died trying to push their way through the lower mesh or having bounced off and failed at their attempt to flee the fires. Elsewhere we came across a dead koala, although we haven’t heard of any other koala deaths as yet.

On a brighter note, an endangered brush-tailed rock wallaby was sighted safe and sound (although out of the burned out National Park). Its location is being reported to authorities. 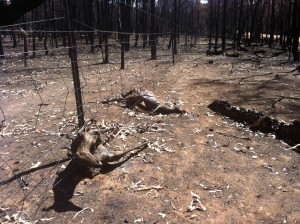 Kangaroos caught in a fence

Internet is still sketchy so can only send you these less-than-joyful photos. Tomorrow we hope to be able to show you more optimistic images!