The Tree of Compassion’s wildlife rescue and treatment team has been on the ground today around Coonabarabran, meeting local authorities and wildlife carers as well as treating animals. The devastating fires in this part of NSW may be under control, but animal survivors still have a struggle ahead.

Not many animals have been coming in so far, hopefully because many escaped the fires, but many will have perished. Some of the animals that Dr Howard Ralph examined and treated today included a cockatoo with a damaged wing (found dazed and confused at a back-burning operation near Tooraweenah – he was well-behaved and put up with his examination very patiently for a cockatoo!), a young sugar glider (thin and with matted and dusty fur evidence of his ordeal), and a baby kingfisher (found by the side of the road, also thin and displaced from normal habitat).

The countryside is blackened and ravaged. Five or six dead kangaroos were found along the fenceline – an indication of how much more difficult the wildlife has it with human obstacles. Fences often catch macropods in the best of conditions, so there is no doubt these artificial divisions are death-traps in times of fire, heat and smoke. 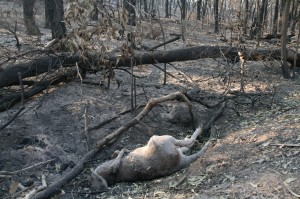 Tania, Richard and Dr Howard met with some RSPCA officers. They have had a daunting task – a huge area with little veterinary or other support. Hopefully our team will be able to help more animals survive not just the fire, but its aftermath.

More good news, new shoots of grass are already springing up after recent rains, and sheep and kangaroos (quite a few were spotted today) are increasingly able to forage this essential food supply.

If you would like to support this campaign, please visit our donate page so the team can stay as long as possible.

PS, we will have more photos when we can establish a better internet connection.